They say that having a child colors your understanding of God and life.  That bringing new life into the world changes how you see the world.  Until three months ago I didn’t realize how incredibly true this was.  I feel like the charcoal sketch that I was looking at has been transformed into the most vibrant of Monet’s.  Possibly the most profound instances of this is in regards to how God has painted my understanding of prayer and His emotional nature.

I’ve always prided myself on being a man who was confidently in touch with his emotional side and when it comes to prayer I’ve always prided myself on being the guy who says “it doesn’t matter what you say — just speak and let the Holy Spirit translate it for you!”  But if I can be honest, having Maisey has opened my eyes to just how theological I’ve been about all of it.  It’s been a standard case of the “head but not heart syndrome”.  I’ve known in my mind how God desires us to talk to him in prayer, I’ve known theologically how the Holy Spirit intercedes and translates for us when we talk to God but I haven’t felt God’s heart for us regarding prayer.  It took the birth of my daughter for it to finally click.

Not too long ago Maisey started to experiment with her voice by cooing.  One time after a nap I went to her cradle to pick her up and bring her into the living room.  She was already awake babbling to herself when she noticed me.  Seeing me produced a burst of excited kicks and flails as her babble went up an octave.  Now, I obviously have no clue what she was trying to say to me, but the simple fact that my little girl woke up and wanted to communicate with me unleashed a spring of emotion from within me that caught me quite off guard.  While I was sitting in the blend of happiness/awe/joy/contentment, and a pinch of a few other emotions that I can’t quite pinpoint, I heard God speak to me.  Like a steady voice in the back of my mind he said, “Derick, do you get it now?”  In that moment I realized I had just felt God’s heart for us — for me — regarding prayer, possibly for the first time.

There are approximately 650 instances of prayer throughout the Bible.  Jesus himself prays 25 different times during his ministry on earth.  In so many ways prayer is like drinking spiritual water.  Our hearts and minds seem to soften and open when we pray and close and harden when we do not pray.  I think this is why Jesus talks about praying to the Father for our benefit and not for his in passages like John 11:42.  He knew how difficult it is for us to truly pray and he was modeling what true prayer is to us.  Here’s a scary question, how would an incomplete or inaccurate view of prayer dehydrate my heart and mind?

Dehydrated Prayer and an Emotional God

Take a few minutes to read through the following verses.  As you do, focus on the emotion that is attributed to God in the language.

Is it natural or unnatural for you to see emotion dripping from these passages?  Chances are that if you come from a conservative church background you’d answer that it is unnatural.  It might even make you a little uncomfortable to pull the emotion from the text that is clearly there.  Many of us have been taught to use our brains first and to see our emotions as something of a wild card that cannot be trusted.  We have been trained to look past God’s emotion when we see it in His word.  A merely academic study of God’s word and a dehydrated prayer life go hand in hand, and they are both byproducts of wringing the emotion of God, out of God.

Just look at the terminology that scholars use to identify some of God’s attributes.  To define God’s everywhereness we say He is omnipresent.  To define God’s complete power over everything we say He is omnipotent, and to define God’s perfect emotional state we say He is omniemotional…actually we say He is impassable.  That’s right, to define God’s perfect emotional nature the word used is impassible!  Now my first thoughts when I hear impassible is Gandolf declaring to the Balrog in Moria “YOU SHALL NOT PASS!”.  Is anyone else with me on that one?  Either way, would you say that the word impassible has a restrictive flair to it?  From my experiences I often heard of God’s impassibility described that way.  God “properly restricts” His emotions.  The idea behind it is that God never makes decisions out of the seat of His emotions.  He transcends emotion.  But what if we are thinking about God and His emotional nature all wrong.  What if instead of saying that God properly restricts His emotions, we could instead say that He is truly and fully emotional?

How God colored my understanding of His emotional nature. 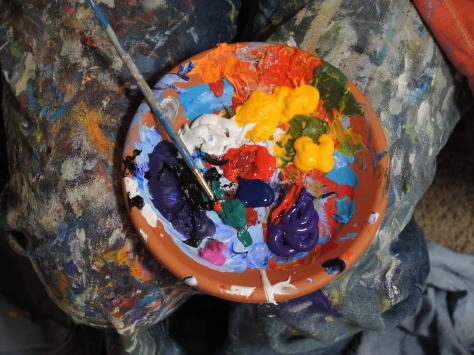 God is a good father; he went to incredible extremes to rekindle a relationship that was broken with His children.  He makes it clear in the scriptures that He desires and takes delight in having His children communicate with him, but somehow it’s so easy to miss that.  I think for me, at least, years of studying the Bible in a systematic way in a theological school and then later as a pastor has led to the wringing effect I brought up earlier.  I have learned to look for the principals of truth in each passage and carve them into figurative stone tablets to place in my mind.  And I have created a false God that looks eerily similar to but is entirely different than the one true God.

Three months with Maisey has helped me to take a step back and see the fallacy in that way of thinking.  God is deeply emotional and if I do not dwell on what this means for me, an image bearer, I fear I’ll be dramatically stunted in my pursuit of Him.  Instead of trying to turn the volume down on my emotions to find “balance”, I need to adjust the dial.  What would it look like for me to weep at what makes God weep or to take delight and pleasure in people as God does?  And what would it look like for me to communicate with God with all of my mind as well with all of my heart?  I’m going to spend some time thinking on these questions. Maybe it’ll be beneficial for you as well?